Young people with disabilities are often isolated from their peers, but community members in Groton, MA frequently interact with residents at Seven Hills Pediatric Center. 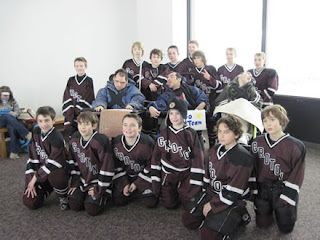 This winter players in the town middle school hockey league invited residents to attend a tournament held at The Groton School, a private college preparatory school in Groton. In the spring local kids hosted more residents at one of their Little League games. 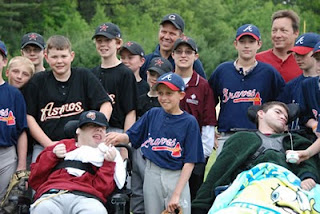 “Being included adds variety to the daily routine and activities like these give residents exposure to other children,” says Arlene Howard, volunteer coordinator. “We are fortunate to be in such a welcoming community.”

For information or to volunteer, please visit http://www.sevenhills.org/ 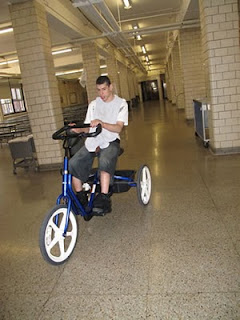 H.A.L.O. recently donated an adaptive tricycle to the Gavin Middle School in Boston at the request of Physical Therapist Susan Maltz, MPT.

It adds variety to therapeutic treatment plans and keeps students motivated to exercise, and everyone thinks it’s pretty cool when students ride the Rifton Wrangler through the cafeteria .

Gavin is a traditional public middle school which also hosts special needs programs that serve students with moderate to severe developmental disabilities. Some students require the use of wheelchairs, feeding tubes or other medical equipment.

“The kids are 11 to 14 years old and it is difficult to keep them engaged in continuous motor activity,” said Maltz, “I can’t express enough how it important this bicycle is to our program.”

The rectangular handlebars offer plenty of places to put hands; the low cross bar makes it is easy to mount; and the adjustable seat with higher back provides stable sitting.

“Not only are all the kids crazy about it, they can do it themselves. It’s age appropriate and such a normalizing thing,” said the therapist. “Their faces just light up when they ride and the other students enjoy watching them.”

“I am totally grateful to the H.A.L.O. Foundation for giving us the tricycle,” Susan said. “In addition to the physical benefits it also provides a very important social experience.”

Horror stories. That’s what parents of teens with brain injuries say about life before enrolling their children in the Ivy Street School. 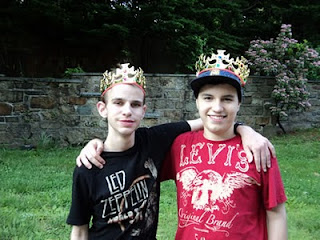 Anger, frustration and sometimes violence were everyday events. Families felt out of control, children were socially ostracized, and schools regularly kicked them out. There was no happy ending in sight.

“Bridget was very angry about changes in her life but unable to deal with it because of her brain injury,” said one dad.

“Stephanie had seven failed (school) placements, because they didn’t understand how to help her, ” her mom said.

Ivy Street focuses on making life meaningful for the young victims of accident, stroke, tumors or genetic abnormalities, and helps them build bridges to adult life.

Brain injuries can be invisible,” said Barbara Salisbury, CEO of MAB Community Services, which operates the school. “Often our kids do well until adolescence, then they go out of control. Schools don’t know what to do, because they look OK on the surface.”

There were no signs of tragedy when HALO visited the school on the day of the annual talent show. Laughing young people rushed to assemble costumes and warmly greeted returning alumni and visitors.

Thirty students aged 13-22 live and attend school year round in a converted mansion in Brookline, a quiet Boston suburb. MAB (formerly Massachusetts Association for the Blind) founded the school in 1993 after medical advances improved survival rates for individuals with brain injuries.

Ivy Street tailors academic plans to each student’s education level and vocational interests. All students start with a job in the school, then advance to volunteer work and then compensated employment in the community.

“Work gives them so much . . . It provides structure, increases confidence and gives them hope. We try to help them build bridges to their future,” said Barbara.

Recent graduate Stephanie Leonard, 22, says Ivy Street helped her find her voice. She writes a blog for a local newspaper, was recently published in the inaugural edition of Our USA Magazine and has been accepted at a community college.

Kids who have conditions like muscular dystrophy, congenital myopathy, spinal muscular atrophy and mitochondrial disease can’t make their muscles work predictably, so they miss out on a lot of fun. Plus, they have to make frequent visits to the doctor and hospital.

In 2009 H.A.L.O. teamed up with the Pediatric Neuromuscular Clinic at MassGeneral Hospital for Children in Boston to help 30 of about 300 regular patients feel a little bit better about coming to hospital appointments.

The clinical team consulted with patients’ families, then purchased gifts from their personal wish lists. They presented the gifts as a surprise, usually at the patient’s next appointment.

“It was pretty special for the kids,” said Laurie Bliss, clinic coordinator, who, along with medical students Kelly Dominick, Kristen Lundgren and Jamie Brown identified the patients who could benefit from attention.

“Everyone was so excited and thankful,” said Laurie. “When I gave one little girl her gift she couldn’t stop jumping up and down (albeit small hops) because she was going to be able to see a movie with a friend.”

Dr. Brian Tseng, MD, PhD and Director of Pediatric Neuromuscular Service at MassGeneral Hospital for Children, said the gift program dramatically enhanced the lives of the patients, because it came “out of the blue” and demonstrated that someone cared about their daily struggles.

“I work with amazing children and families who are unfortunately touched by devastating neuromuscular disorders. H.A.L.O.’s generosity made them feel extra special.”

To learn more about the clinic please visit: www.mgh.harvard.edu/children/specialtiesandservices/neuromuscular/